2016 US OPEN: THUNDERSTORMS SUSPEND OPENING ROUND

2016 US Open: Thunderstorms suspend opening round

It’s going to be a busy, long Friday at the US Open after rain washed out play on Thursday.

Three separate thunderstorms lashed Oakmont Country Club on the opening day of the 2016 US Open. Heavy rains saw temporary water hazards form across greens and fairways and the USGA were eventually forced to suspend play for the day with many golfers yet to hit a golf ball

Unheralded Andrew Landry leads the field at 3-under par and returns to Oakmont in the morning with a birdie put to extend his lead. Bubba Watson has completed 14 holes and is 2-under par, one stroke ahead of Kiwi Danny Lee who is 2-under par through 13 holes.

Landry fired five birdies in his first 13 holes to be three shots clear but consecutive bogeys at the 7th and 8th holes (his 16th and 17th) brought him back to the field.

Jason Day and Adam Scott were two of the five Australians who did not hit a golf ball on day one with only Aron Price and Marc Leishman teeing their ball up.

Price managed to complete his round after playing in the first group of the day. With good friend and pro golfer Nick Flanagan on the bag, Price got off to a flying start with a birdie on the difficult par-3. Flanagan won the 2003 US Amateur at Oakmont and will be invaluable to Price but he’ll be in with a tough task to make the cut after he carded seven bogeys to go with his lone birdie to get in the clubhouse at 6-over.

Despite the score, and multiple tough breaks for Price during his round, the Sydneysider still has his sense of humour posting this to his Twitter account after completing his round. 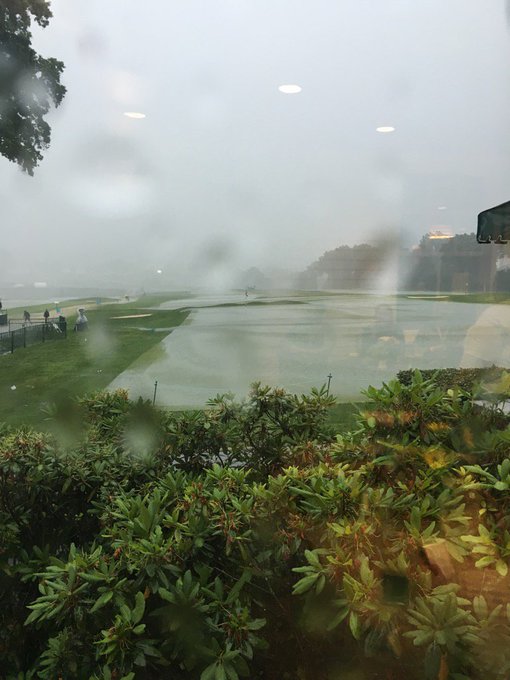 I probably wouldn't putt off the green from 20 feet now.